Lewis, et al 2022. Distribution and seasonality of the Ruppia dominated aquatic macrophyte community and filamentous algae in the southern Coorong

Executive summary
The Coorong and Lakes Alexandrina and Albert wetland in South Australia is recognised under the Ramsar Convention as a wetland of international importance. The Coorong provides ecological services to a range of biota, the foundation of which is the aquatic macrophyte community dominated by Ruppia tuberosa (the Ruppia Community). The Millennium Drought (in particular during the period 2001 to 2010) significantly impacted the southern Coorong including an almost complete decline of the Ruppia Community including their seed banks, which has decreased the resilience of the system. The recovery of the Ruppia Community has been gradual with the number of sites occupied by plants increasing over the past decade. Recovery has been impeded most strongly in the Coorong South Lagoon because of the hyper-eutrophic state and algal blooms, including mat forming filamentous algae that physically disrupt the aquatic macrophytes’ ability to flower and set seed.

The South Australian Government’s Healthy Coorong, Healthy Basin (HCHB) Program Trials and Investigations (T&I) project includes an aquatic plants and algae component (Component 2) that was undertaken between July 2020 and April 2022. This component aims to support management by investigating factors that limit filamentous algal growth and restore Ruppia distribution and abundance. This may require additional management interventions to facilitate direct recovery of ecological functions in the Coorong South Lagoon. To achieve this, the goal is to shift the southern Coorong ecosystem from algal dominated to a Ruppia dominated habitat, improve water quality, and restore the ecological function associated with a Ruppia dominated state.

A different methodology to the The Living Murray (TLM) condition monitoring program was applied to survey the aquatic macrophyte community in the Coorong. The new methods have improved understanding of the baseline status of these important aquatic plants. The methods applied here could be further modified into a sampling protocol streamlined for future application as a routine monitoring program to provide evidence of the condition and trend in the Coorong ecosystem.

The aquatic macrophyte community of the Coorong South Lagoon is an assemblage of several species. This assemblage has a suite of characteristics that are different from a monoculture of the well documented Ruppia tuberosa. In the Coorong South Lagoon, Ruppia tuberosa is much more common than the two other co-occurring species - Althenia cylindrocarpa and an unresolved species of Ruppia. In addition, two haplotypes of Ruppia tuberosa were detected, the less common haplotype only found in samples from the South Lagoon in the 2020 reproductive sample. A DNA toolkit to easily identify these species using eDNA techniques has now been developed. We recognise that a multi-species aquatic macrophyte community existed historically. Evidence from reports, collections lodged in the herbarium of the Botanic Gardens of South Australia, Adelaide, and published field photographs, support a mixed Ruppia/Althenia community prior to the Millennium Drought (1996-2010). The terminology ‘Ruppia Community’ is proposed for this assemblage.

By the end of the Millennium Drought in 2010, the Ruppia Community had dwindled to highly isolated remnants throughout the sampling area of this study, and the seed bank was largely exhausted. The Ruppia Community is now found the along the extent of the surveyed area, with a range from north of Long Point to south of Salt Creek, and, albeit uncommonly, at Tea Tree Crossing, (approximately 112 km from the Murray Mouth), where the absence of plants is likely due to rocky substrate or elevation (shallowness). The current spatial extent of the Ruppia Community appears to have followed a dispersal limited recruitment trajectory.

Comparing the current seed bank data with historical TLM monitoring data, it appears that the current seed bank is at ~30% of pre-drought levels. The results and observations from these surveys support the ongoing concern that while Ruppia plants are increasing in extent, they are not performing well, having poor vigour and limited resilience due to the production of seed in many areas remaining low. The observation that low plant abundance within the Ruppia Community was associated with poor sediment quality has emphasised the need for developing options to enhance sediment quality through management strategies.

The La Niña summer weather cycles in 2020-21 and 2021-22 have led to longer-term availability of water entering the Coorong system. The water is predominantly from unregulated flows from the River Murray but also water released through Salt Creek from Morella Basin. This appears to have encouraged the formation of more mature populations of Ruppia tuberosa, and an increase in turion formation. However, given the cyclic nature of El Niño–Southern Oscillation (ENSO) conditions, interpretation of long-term trends should be made with caution.

During warmer months, large areas of high biomass filamentous algae can form across the southern Coorong and have multiple effects: shading of the Ruppia Community reducing productivity; increasing the high turnover organic production cycle in and over aquatic macrophyte habitat; physical interference with flowering, fruiting and completion of the Ruppia Community members’ lifecycles; and generation of organic sludge that creates anoxic and sulfidic environments, poor sediment quality and impacts on aquatic macrophyte growth and productivity. Based on the results of this study, a management target of reducing algal mat formation to less than 100 g DW m-2 was identified to maintain and improve the condition and resilience of the Ruppia Community.

The lack of algae in the very southern sections of the Coorong South Lagoon may provide an opportunity to understand strategies to manage the presence of algae in the entire Coorong system. This region of the Coorong has similar salinity to other areas that contain significant algal mats; hence, other processes limit the formation of filamentous algae. For example, sufficient water movement may act as an impediment to dispersal of algae further south, or more likely, that even modest levels of flow over aquatic macrophyte meadows may act as an impediment to physical attachment to plants.

The return of high Ruppia Community biomass and shoot counts at many sites is a positive indication for the current state of the Coorong system. Implementing options to enhance resilience to future changing environmental conditions through increasing seed banks, removing algal loads and encouraging higher biomass populations are proposed as options to achieve the best outcomes for the long-term viability of the Coorong.

The previously abundant charophyte, Lamprothamnium papulosum was absent from the southern Coorong ecosystem in this study. The loss of this species could be indicative of the decline in water quality although responses of other, non-macrophyte species were not specifically studied in this project. Lamprothamnium presence may have value as an additional indicator of improved ecological health of the South Lagoon.

Based on the results of this research, the following key points are highlighted: 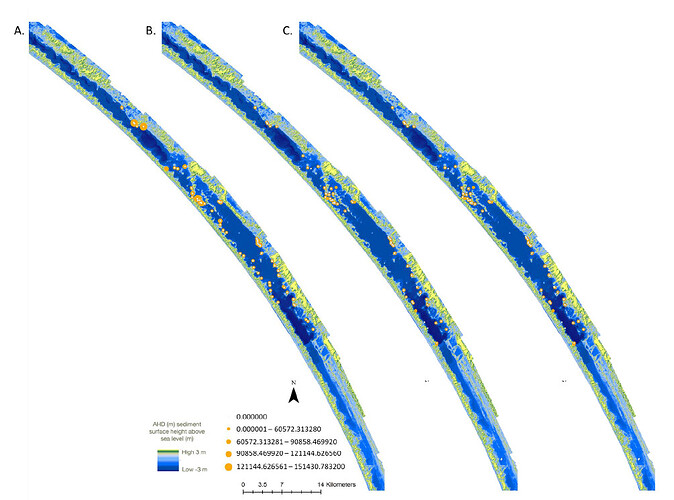