Abstract
The seagrasses eelgrass (Zostera marina) and widgeongrass (Ruppia maritima) are prominent features of coastal lagoons along the Pacific coast of Baja California, Mexico, supporting a rich diversity of marine life. Yet little is known about their spatial distribution in this region. This is a concern because of declining trends in the abundance and distribution of seagrass in parts of northern Baja California and southern California. We used 7-band satellite imagery, 4-band digital multispectral videography, and 3-band color aerial photography to map the distribution of eelgrass and widgeongrass in six embayments along the central Pacific coast of Baja California. The total spatial extent of seagrass was estimated to be 42,697 hectares, of which about 70 percent was eelgrass. This seagrass was primarily lower in the intertidal than widgeongrass in all embayments. Eelgrass and widgeongrass composed the greatest proportion (47 percent) of the spatial extent in the two largest embayments, Lagunas Ojo de Liebre and San Ignacio, and these two embayments accounted for 85 percent of all seagrass in the study area. The native cordgrass (Spartina foliosa) and pickleweed (Salicornia spp.) were the predominate vegetation cover type of marshes in the three northern and three southern embayments, respectively. The three southern embayments contained mangrove (Rhizophora spp.) and the three northern embayments did not, thus marking the northern edge of mangroves along the Pacific coast of North America. This study establishes an embayment-wide baseline for continuing investigations and monitoring future changes in the spatial abundance of seagrasses in central Baja California. 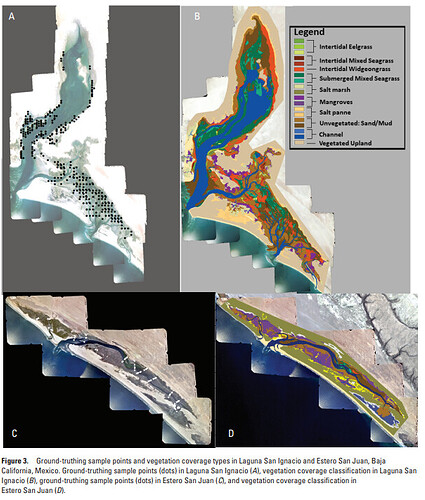